From Hoi An I headed north along a beautiful stretch known as the Hai Van pass. 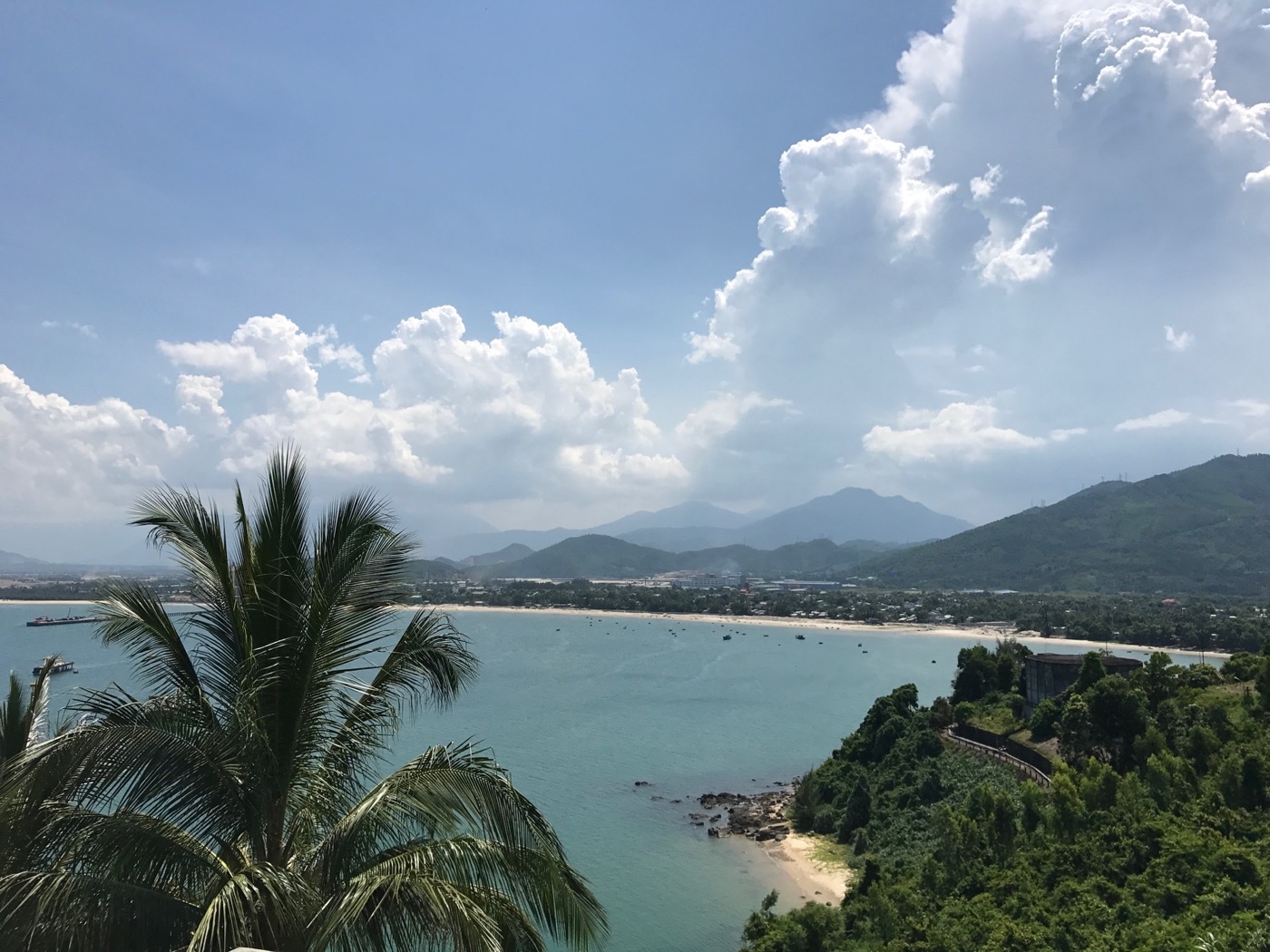 The pass is famously featured in the Top Gear ride through Vietnam. I was happy to count the ride among the most beautiful I’d seen in Vietnam.

I arrived in Hue at a homestay with a host family who spoke very little English. I greatly enjoyed local interactions like this–it is remarkable how much you can communicate with people who don’t speak the same language with gestures and Google Translate. It undoubtably added to the fun of the trip along the way.

I didn’t have much time in Hue. As with a lot of the planning in Vietnam, it was difficult to know how much time to spend at each stop along the route north. I had heard about so many wonderful places and I knew I wouldn’t have a lot of time to see all of them, so I had to pick and choose. Thankfully, I was able to see a lot of the famous Imperial city the evening I arrived. Despite being under ominous clouds for most of the evening, the rain held off. 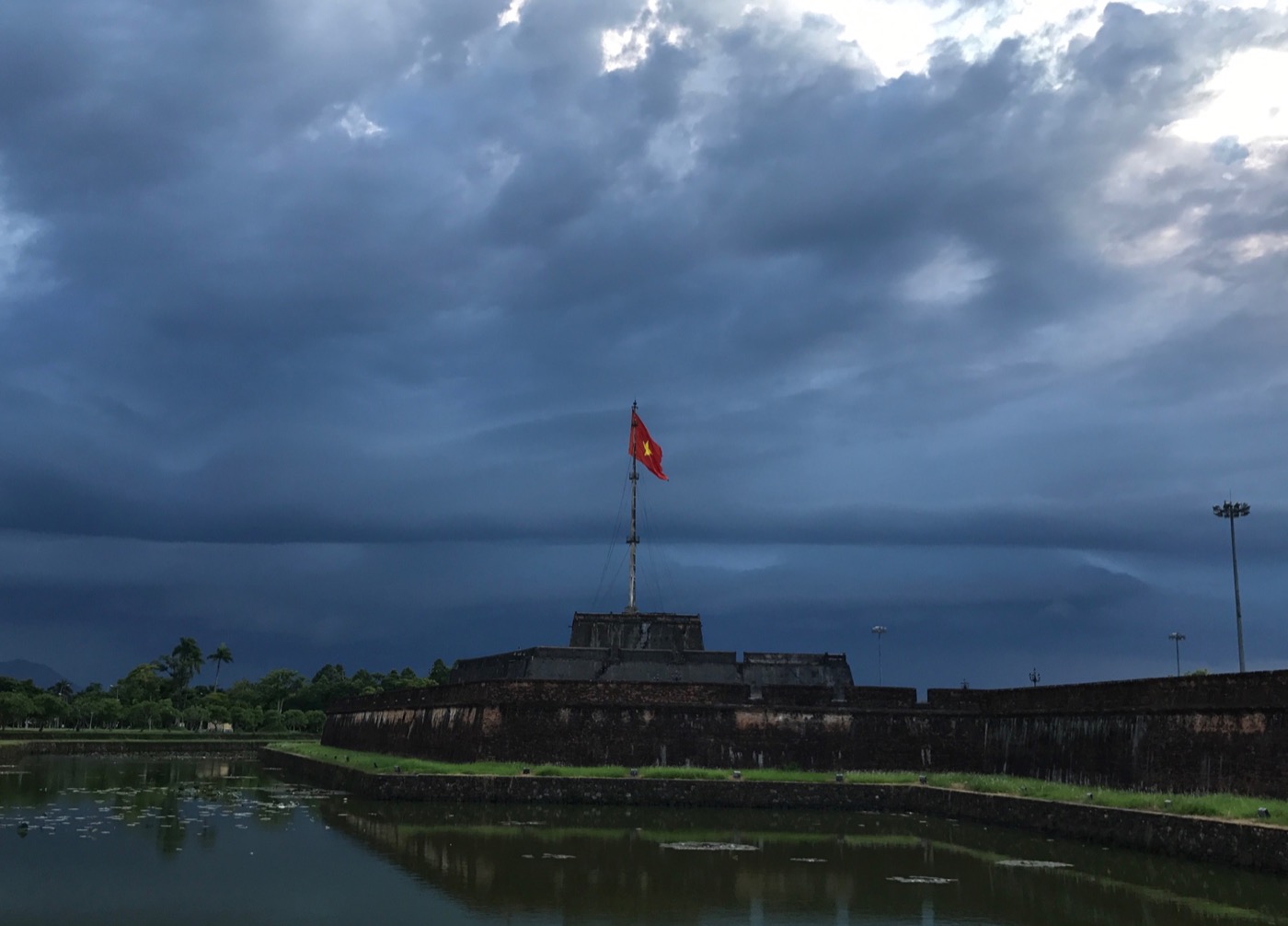 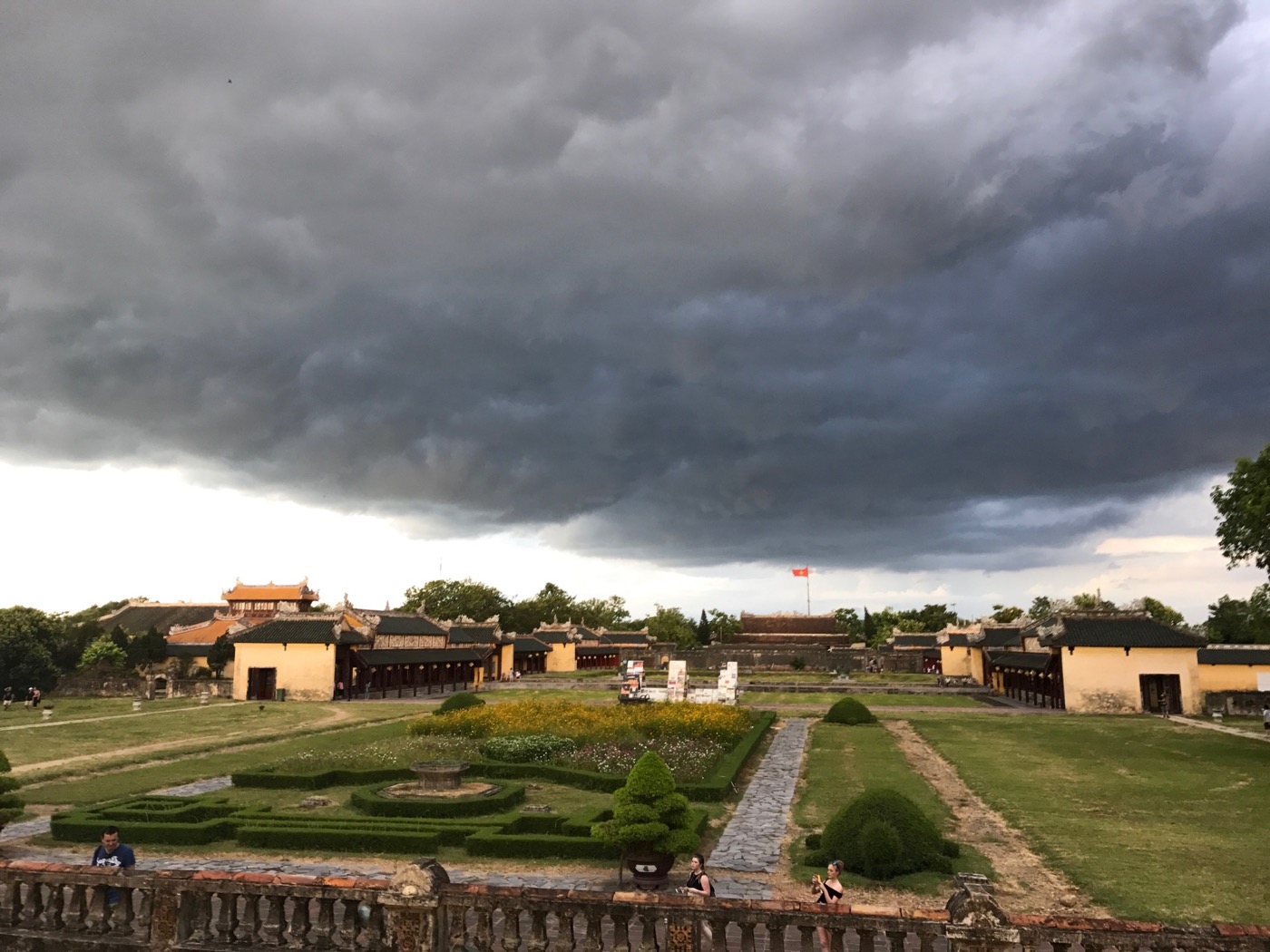 The Imperial city was beautiful, and I couldn’t help but marvel at the gardens and buildings situated along various waterways. I walked around for hours and took a moment to watch the sun set from a bonsai tree garden outside of the main palace area. 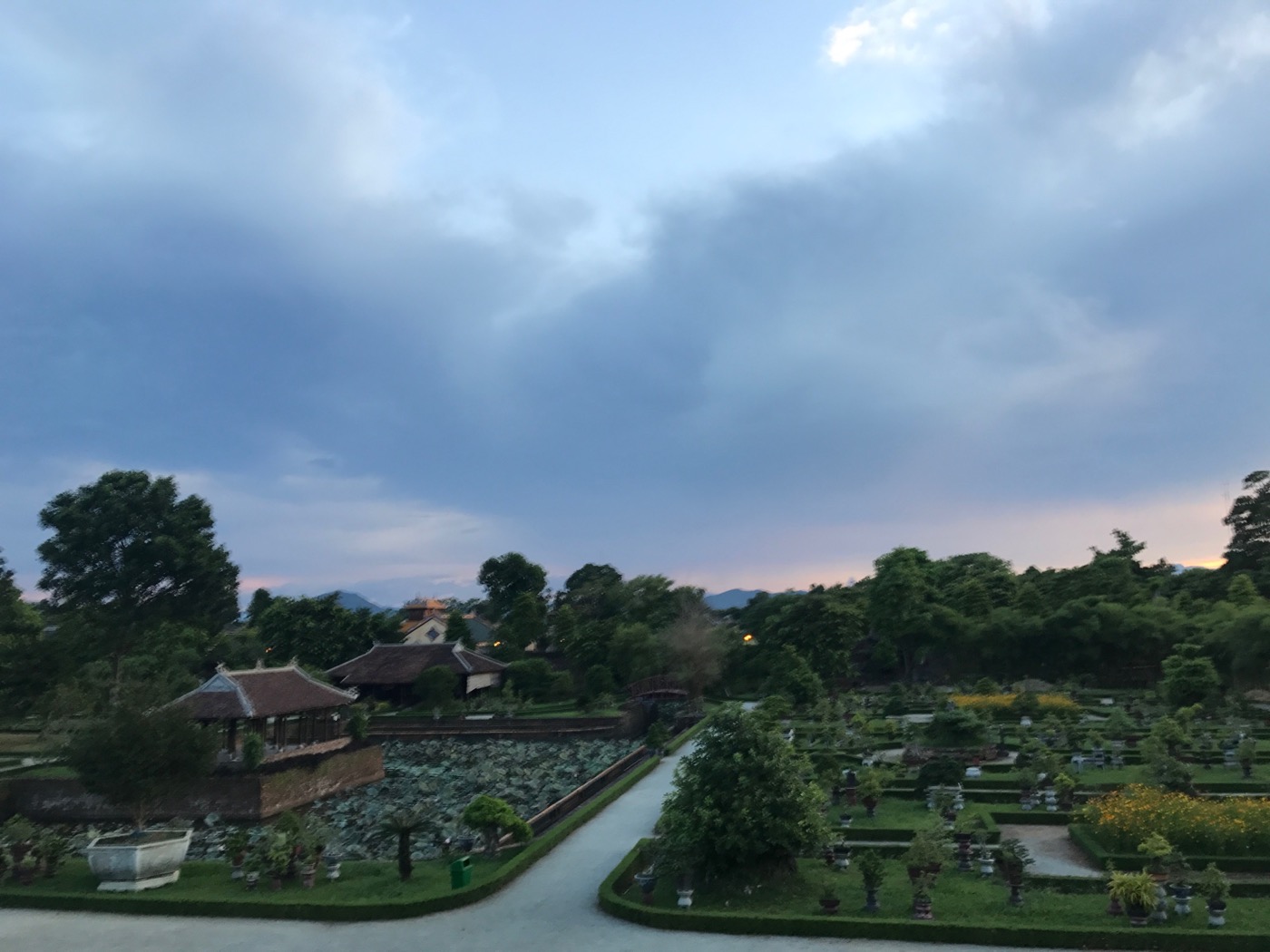 I walked into town to do some exploration, and stopped at a roadside stand for some Bun Cha along the way.

I set out early the next morning to see the remaining sites in the area before heading out to Phong Nha. I visited a beautiful pagoda in the morning, and arrived right as they were having a Buddhist service in a temple there. After the service, three women came out to the front of the temple with three cages full of sparrows, and released what must have been a hundred birds into the air. It all happened so quickly so early in the morning, and I just stared in amazement watching dozens of birds leave their cages and fly off. 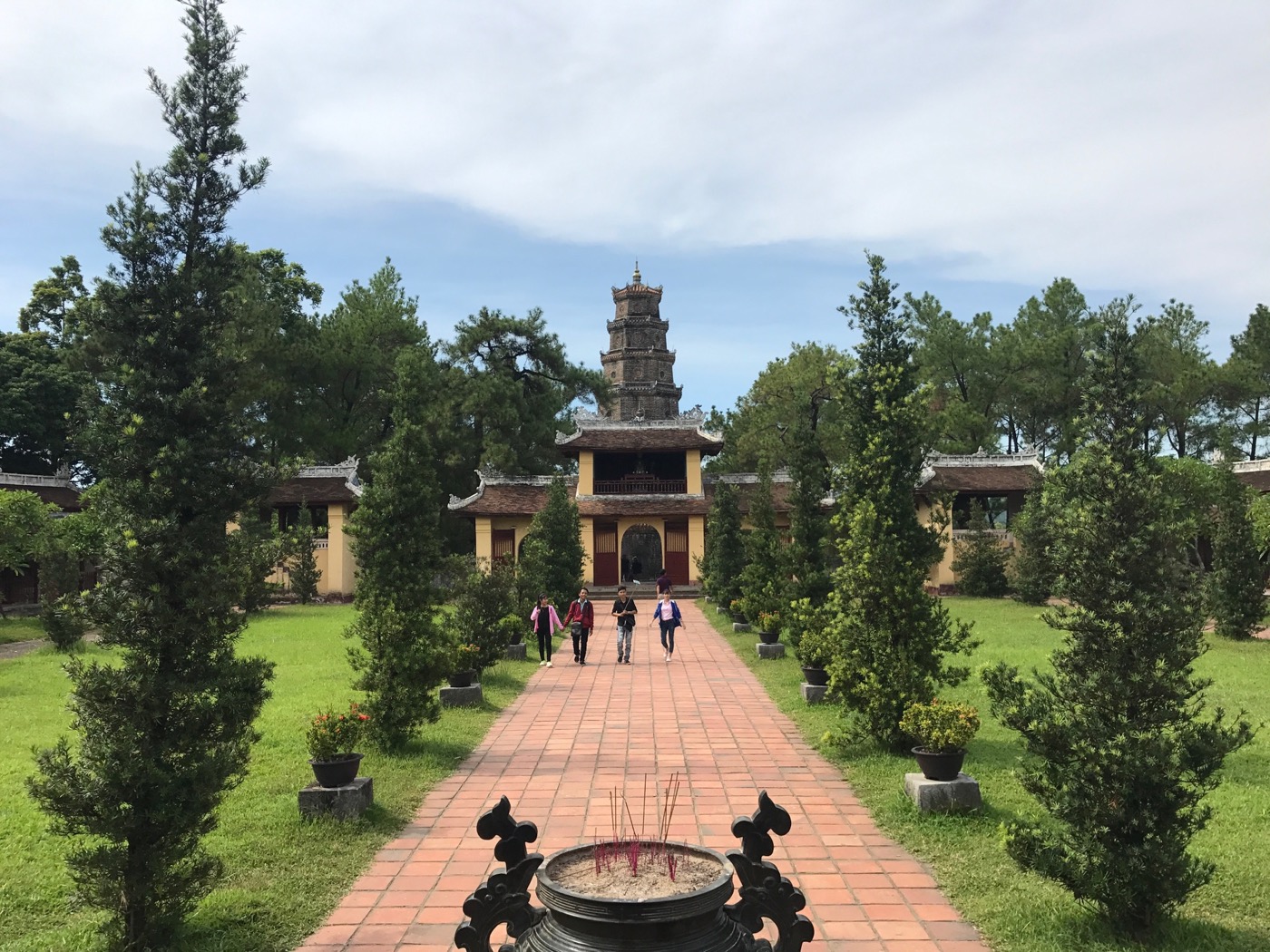 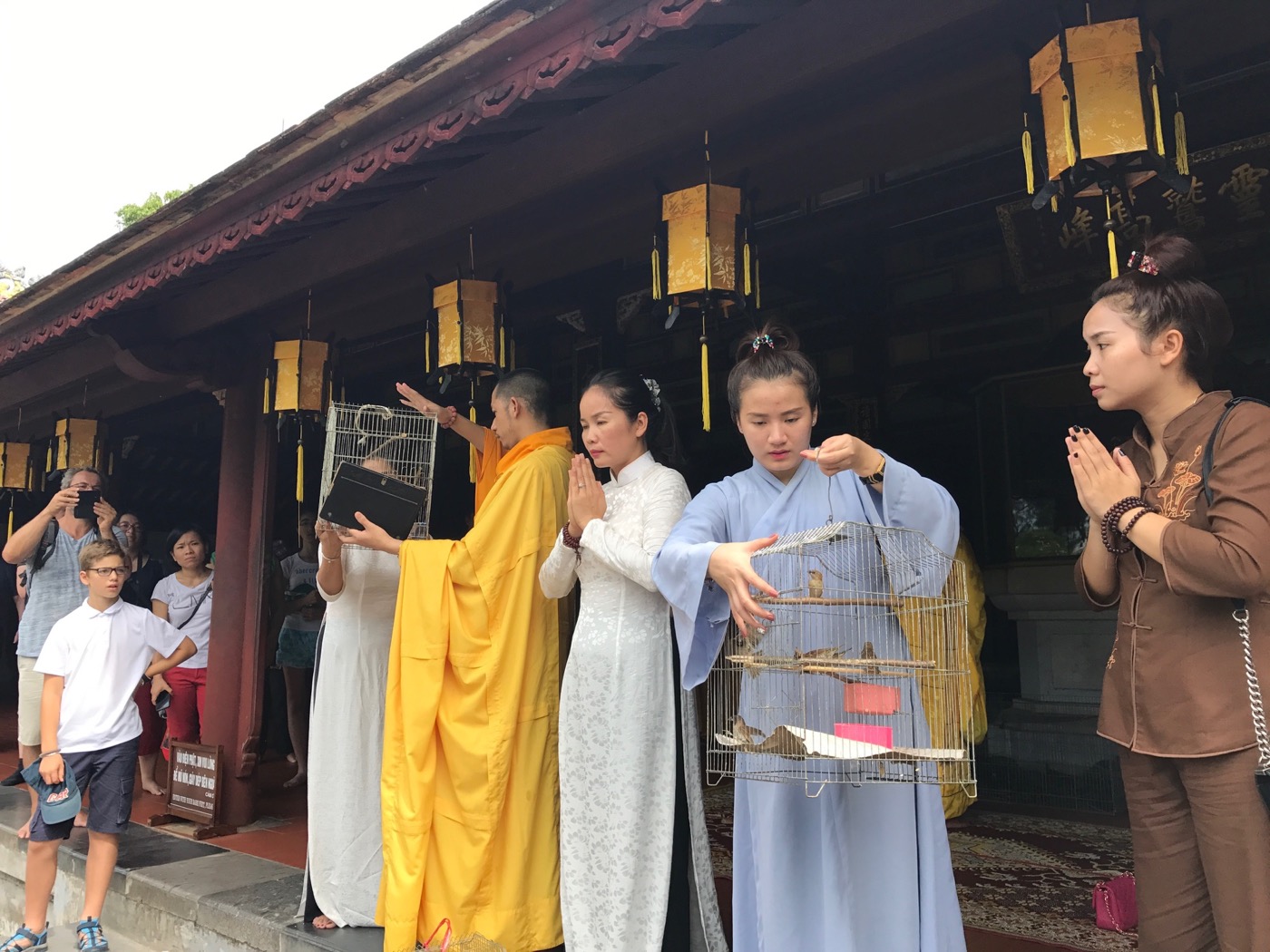 I enjoyed a couple more sites before having my bike worked on a partner garage to the one I rented from in Ho Chi Minh city. With the bike all polished up and ready to go, I set out north.

Phong Nha is most famous for its national park filled with caves. I hadn’t originally planned on stopping there, but it is almost impossible to head north and not pass through the town. I arrived at sunset, and watched it dip behind a church on the opposing side of a riverbank. 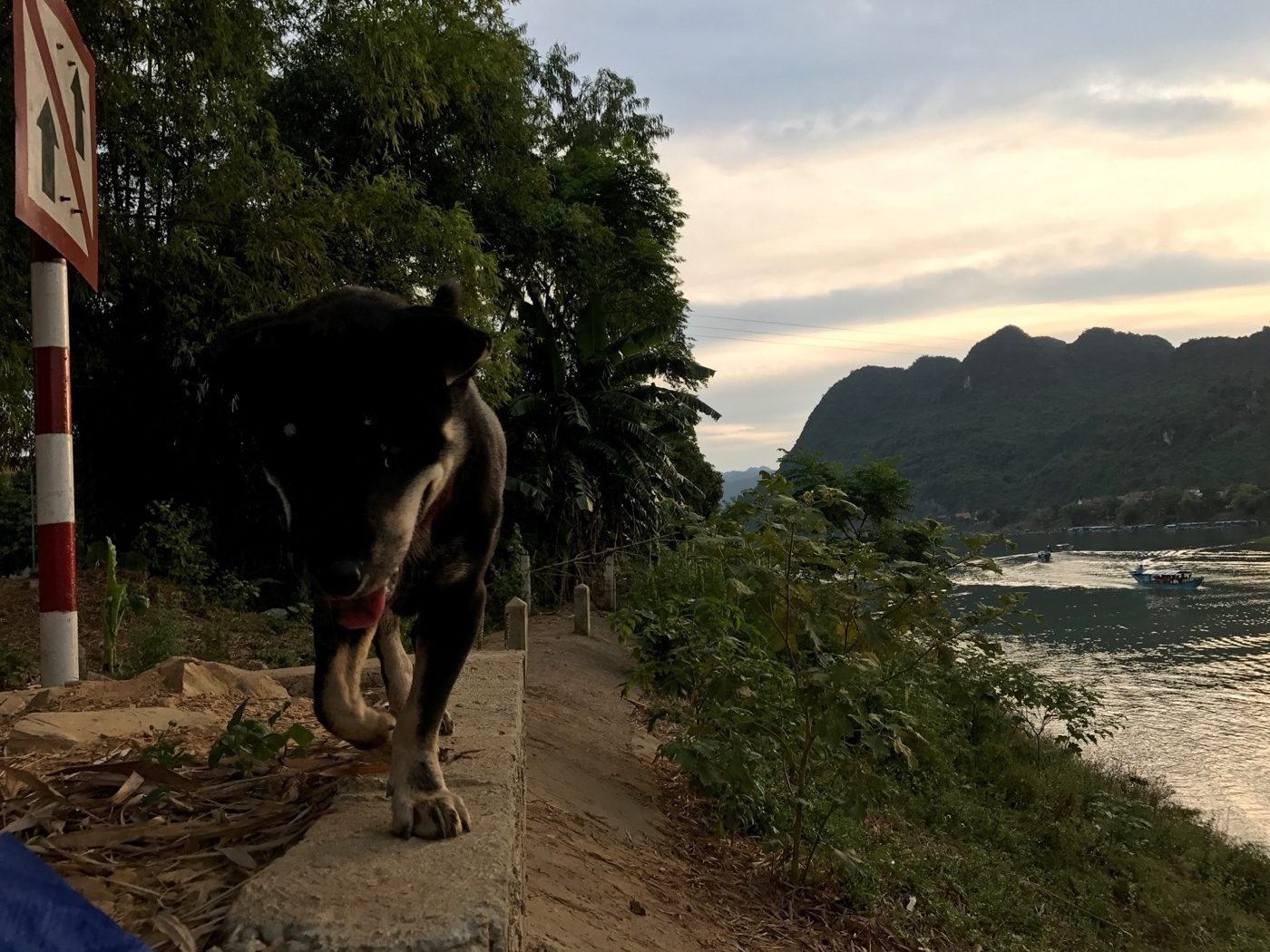 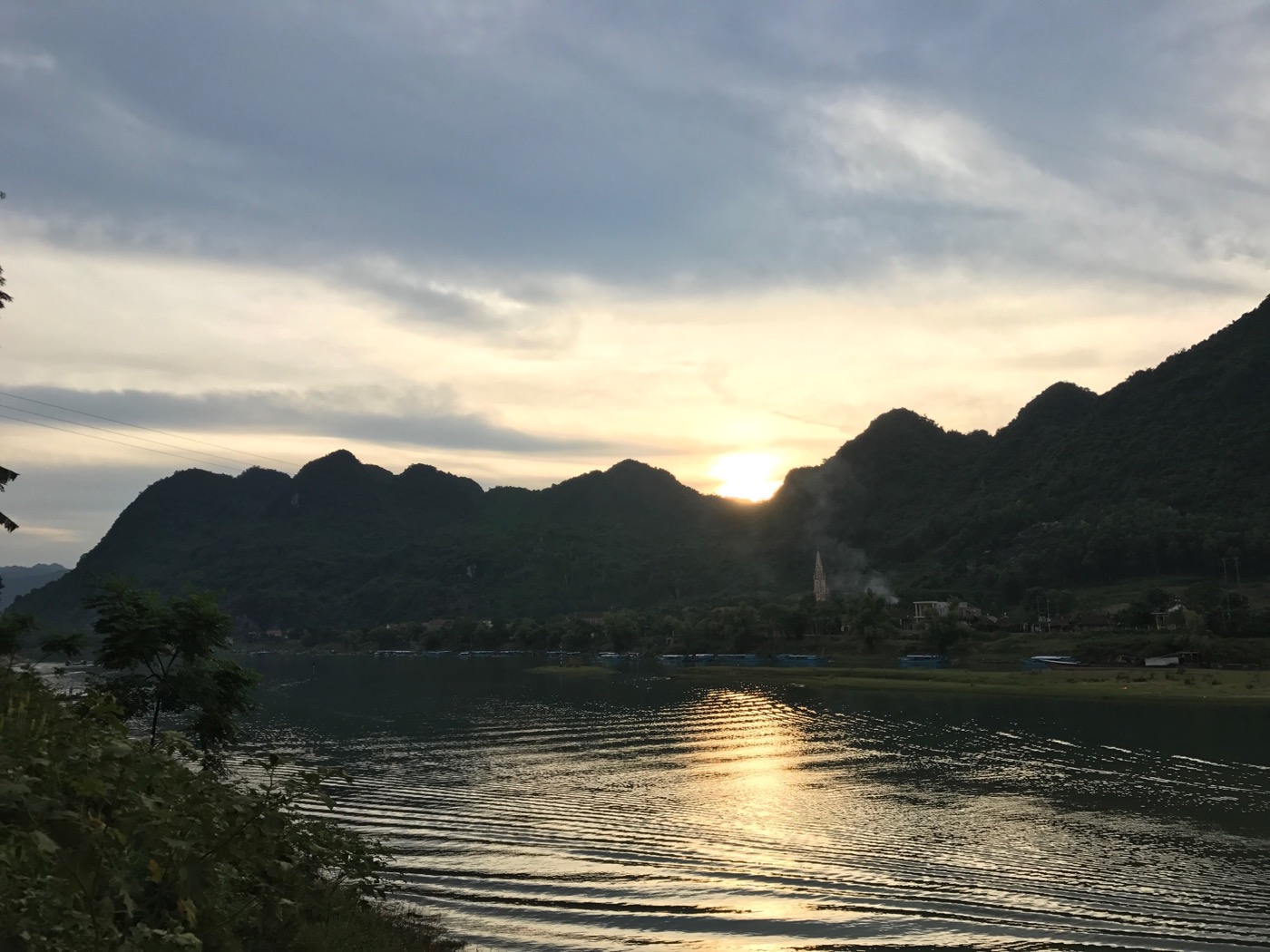 Those who have seen pictures Ha Long Bay probably have a sense of the geography in Phong Nha, except in the case of Phong Nha, the peaks emerge from the land instead of the water. The caves were beautiful, and best of all, they were a respite from the heat outside. 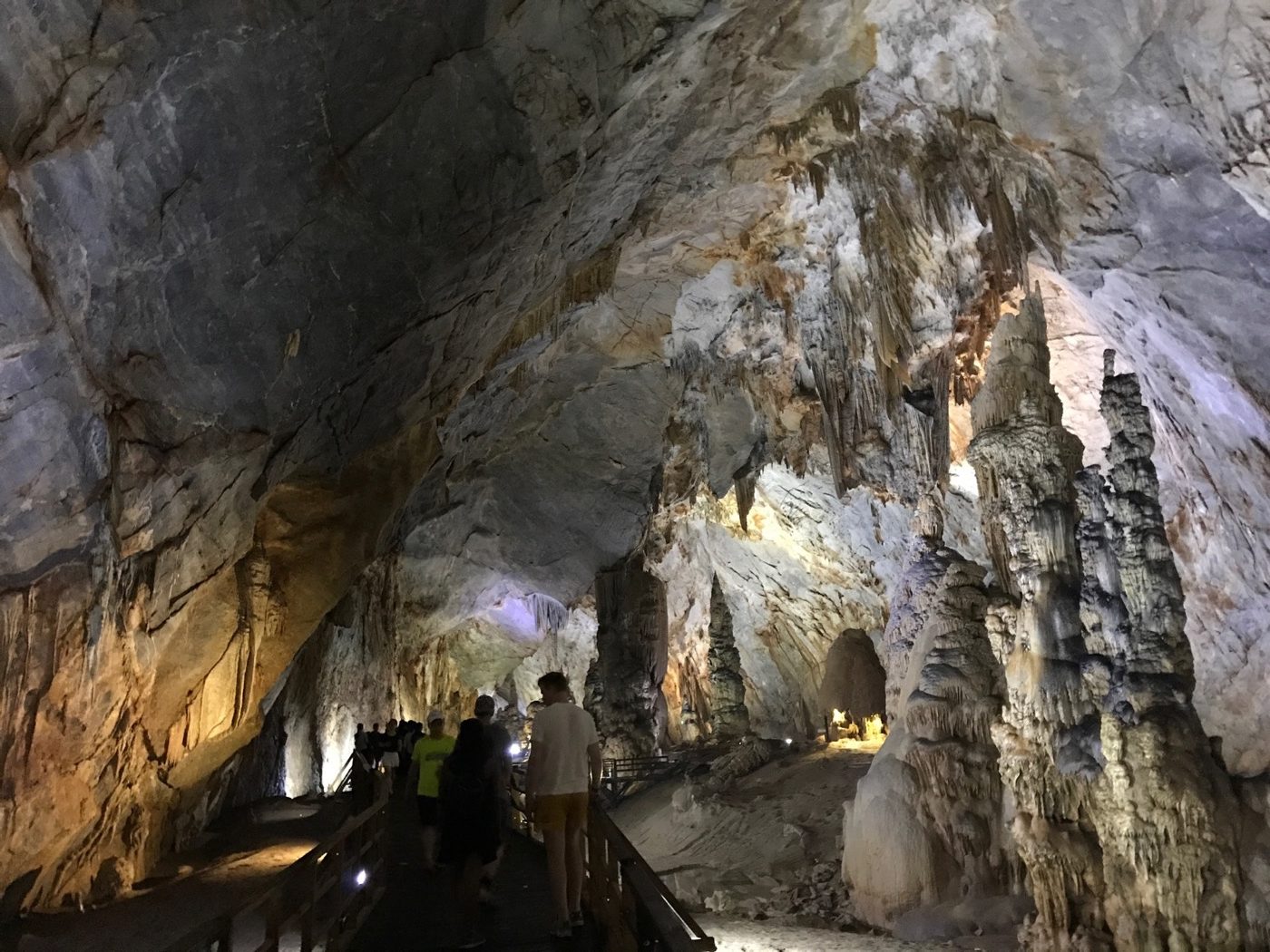 I spent the rest of the day roaming around the forest via motorbike. 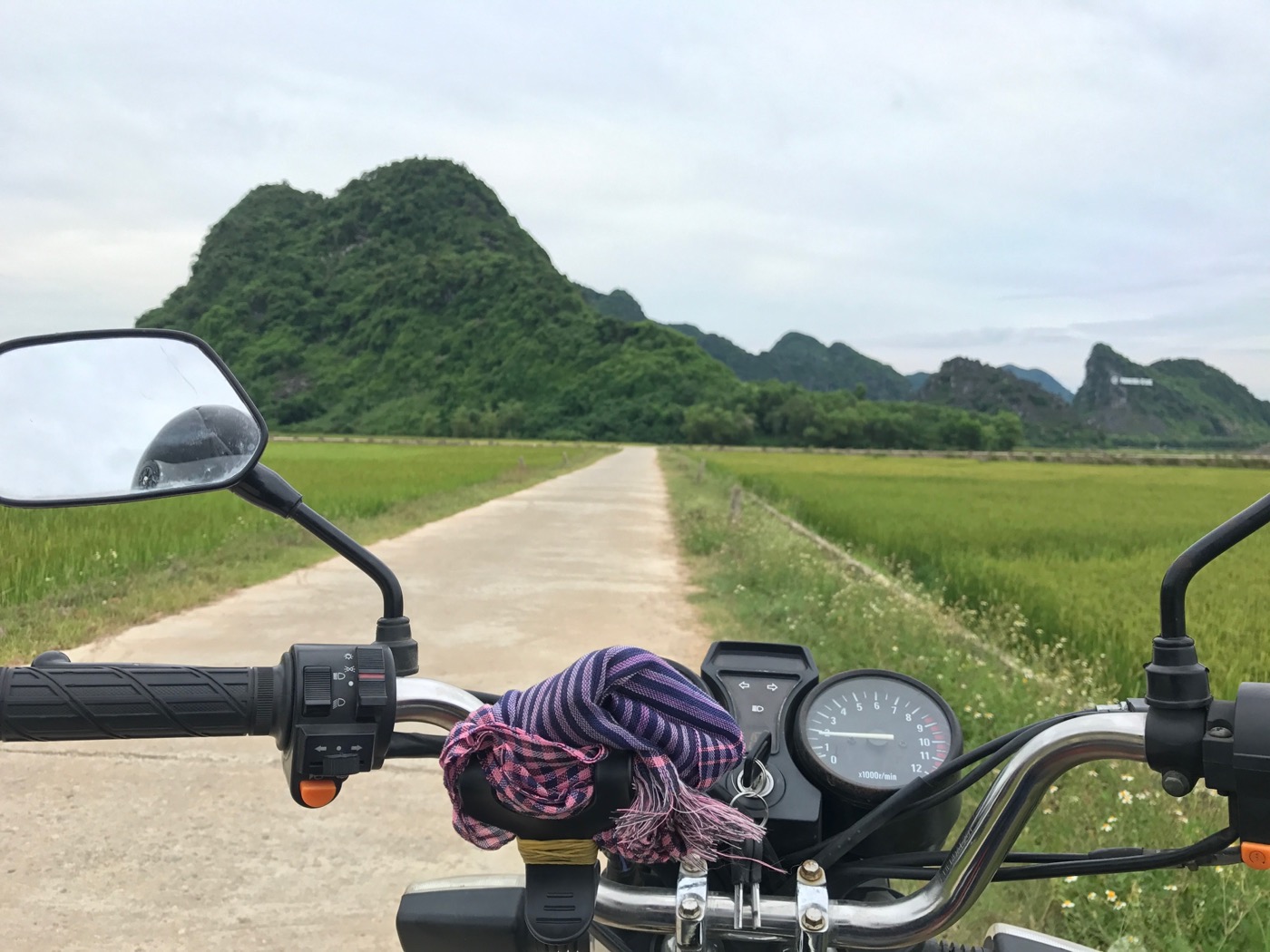 Being able to explore at my own leisure on my own vehicle was one of the reasons I enjoyed Vietnam so much. It was an all around lovely stay in Phong Nha.